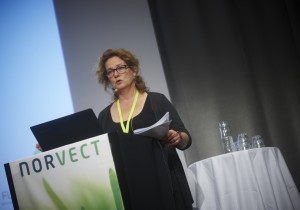 Interview with Dr. Randi Eikeland at the NorVect Conference 2015

Eikeland is the head The Norwegian National Advisory Unit on Tick-borne Diseases in Kristiansand, Norway.

In the interview, Eikeland talks about Borreliosis and whether it can turn chronic. She does not believe that patients that get Lyme disease and not get well can have a persisting infection. In the interview she claims that there is not enough evidence showing that this is the case in vivo. She also goes on to tell about patients that believe they are ill with Lyme disease, but maybe they have something completely different. She does not advocate long term antibiotics.
She explains that certain Lyme literate doctors and patients live in a different world from the one Eikeland and her colleagues live in. She however claims that it’s a good thing to meet at conferences like NorVect to discuss even though one is of different opinions.

The Global Search for Education: Ticks – More from Norway

By: C. M. Rubin. Blogger and author, The Real Alice in Wonderland.

Complicated problems usually have many dimensions and require multidisciplinary and interdisciplinary strategies to solve them. We talk about this approach in global 21st century education reform all the time, but we live in a world that sometimes forgets the lessons.

One of my loved ones became seriously ill in 2006 with joint pains, vertigo, memory loss and chronic fatigue. Two years of assessments for diseases ensued, including Parkinson’s, ALS, Alzheimer’s, Lyme disease, Fibromyalgia, Rheumatoid Arthritis, Depression, and various cancers. Ultimately, a doctor knowledgeable about Lyme and co-infections diagnosed him, recommending holistic care from a neurologist, a rheumatologist and an internist, while also focusing on improving his psychological health, his nutrition and his lifestyle.

Since this experience, I’ve felt tremendous compassion for all who have to endure this devastating illness. How can we better defend them? I’ve imagined a round table like King Arthur’s that would bring together the brave knights of medical science as well as passionate tick-borne disease advocates to harness the expertise of all; to explore, to uncover through honorable discussion how to find the holy grail: better diagnostic tools and ultimately a cure for multi-systemic tick-borne infections.

Timing is everything. The incidence of Lyme and other tick borne co-infections is rising in more than 65 countries worldwide — diseases that are plagued by inadequate tests leading many to believe there are still millions of undiagnosed cases. Research progress is slow because of disagreements on the unanswered questions related to diagnosis and treatment. Interestingly, more scientific voices are now expressing the opinion that clues lie in the disease’s similarity to syphilis and its ability to become chronic.

According to the CDC, chronic disease accounts for 70% of the deaths and 75% of the health care costs in the United States. Nip a potentially chronic disease in the bud and you are ahead of the game. Hesitate to take action and you’re facing enormous healthcare debt.

The talented women who run the NorVect organization have taken some major steps forward. They held an impressive global vector-borne conference this past week in Norway (which has seen a ten-fold increase in incidence in parts of the country during the past year). This extremely well attended forum was kicked off with an inspiring speech by the Norwegian Liberal Party Leader, Trine Skei Grande. I felt honored to co-host the proceedings.

“We need to understand the method for making a clinical diagnosis and talk about the management of treatment protocol.” – Dr. Joe Burrascano

And so there were the knights of NorVect’s round table gathered to begin the conversation. Some highlights:

“Bartonella species are causing disease in animals and people in North America and throughout the world. They can induce persistent intravascular infection in humans that spans months to years, potentially resulting in vascular rheumatic and neurological disease manifestations.” – Dr. Ed Breitschwerdt

“BB complex bacteria are transmitted to humans by the bites of infected ticks. These ticks also carry and transmit other pathogens such as Babesia, Ehrlichia, Bartonella, and Rickettsia species and viruses.” – Dr. Jyotsna Shah

“We still do not know the cause of the long term complaints after treated neuroborreliosis. There are several hypotheses. Is there a continuing infection? Are there permanent scars in the nervous tissue? What about auto-immunity? Immunological and metabolic dysregulation? Psychological issues? What about co-infections? There is still a lot to discuss and to explore.” – Dr. Randi Eikeland

“Most of the IDSA recommendations are based on expert opinion and are not evidence based. Serologic methods done according to IDSA and EUCALB guidelines are insufficient methods to rely upon. There are probably millions of patients around the world who remain undiagnosed with Lyme and co-infections. In the near future, new genomic methods will allow the detection of a new pathogenic Borrelia species (like Borrelia Miyamotoi) and allow a better identification of various microbial agents responsible for co-infections.” – Dr. Christian Perrone

“Please think of the patients who are anxious and who suffer, and also of the medical teams.” – Dr. Bela Bozsik

“The current CDC guidelines for diagnosing Lyme disease involve serological tests for Borrelia Burgdorferi (Borrelia-Immunoblot/Western blot testings) which show a very weak sensitivity of just around 60% in chronic Lyme disease and cannot help regarding the question of an active infection. Is Borrelia-Elispot a game changer in diagnostics? The sensitivity of ELISPOT is estimated at 84%, and the specificity is 94%. ELISPOT assays provide robust, highly reproducible data and can be retested for the acquisition of additional information in follow-up assays.” – Dr. Armin Schwarzbach

“Borrelia is involved in illnesses like Alzheimers, ALS and MS.” – Dr. Alan MacDonald

“It is important to develop microscope methods to detect blood infections – it is simple and it is cheaper.” – Dr. Carl Morten Laane

“A substantial amount of evidence definitely shows that the main tertiary forms of neurosyphilis, namely the meningovascular (cerebral infarcts secondary to chronic vasculitis) and meningoencephalitic forms, also occur in Lyme disease. These two major forms of late/chronic Lyme neuroborreliosis were pathologically confirmed. We reported the first pathological confirmation of the meningovascular form of Lyme neuroborreliosis in 1990 and the meningoencephalitic form was described and pathologically confirmed by many authors. Borrelia burgdorferi was repeatedly detected and/or cultivated from tertiary brain lesions. These evidences together indicate that chronic Lyme disease exists, and similarly to Treponema pallidum in syphilis, Borrelia burgdorferi is responsible for the tertiary manifestations of the disease. Late Lyme disease is accepted by all guidelines in the US and Europe. The terms late and chronic both define tertiary Lyme disease, therefore the use of chronic Lyme disease as a different entity is inaccurate and confusing.” – Dr. Judith Miklossy

“Please think of the patients who are anxious and who suffer, and also of the medical teams.” – Dr. Bela Bozsik

“The increased risk of infection due to the increased number of ticks carrying tick-borne infections may reduce the life quality of people in our region by preventing people from visiting forests and recreation areas. The social costs for society may also be influenced by increased hospitalization and visits to general practitioners. How can we get a common view among Norway, Denmark and Sweden of these problems?” – Dr. Ashild Andreassen

“I will develop my life for the greater good. I will place character above riches, and concern for others above personal wealth, I will never boast, but cherish humility instead, I will speak the truth at all times, and forever keep my word, I will defend those who cannot defend themselves…..” – Extract from the oath of a knight at King Arthur’s Round Table.

(With thanks to James Rubin for his contribution to this article)

“Borrelia is involved in illnesses like Alzheimers, ALS and MS.”

(All Pictures are Courtesy of NorVect)

C. M. Rubin is the author of two widely read online series for which she received a 2011 Upton Sinclair award, “The Global Search for Education” and “How Will We Read?” She is also the author of three bestselling books, including The Real Alice in Wonderland, is the publisher of CMRubinWorld, and is a Disruptor Foundation Fellow.

Jyotsna Shah, Ph.D, CCLD, MBA
What Have We Learnt About Diagnosis of Lyme and Other Tick-borne Diseases in The Last 20 Years? (incl. 5-10 minutes Q&A)

Christian Perrone, PhD, MD
The gap between current diagnostic tests for Lyme disease and associated diseases and the diversity of pathogens isolated in the world.(incl. 5- 10 minutes Q&A)

Richard I. Horowitz, MD
Why Can´t I Get Better? Using the Lyme-MSIDS Map in Chronic Illness. (incl. 10-15 minutes Q&A)